“There were actually two locations for the business,” said Robert Kuester Junior. “HW Kuester & Son’s first garage was where the double brown doors were next to the Daily Grind.

The auto shop was originally a stable when my grandfather bought it and he built the building next to it,” Kuester said of the location at 150 S. Main Street, which became the Kuester hardware store. “My grandfather, my grandmother, my father and my uncle lived above the hardware store,” he said. “I loved it as a kid because you could stand on the porch and watch the parade.”

Kuester’s grandfather, Herman Walter Kuester, opened the dealership in 1912, selling Hudson and John Deere tools. A yellow, brittle newspaper clipping from the family photo album noted that a “used Studebaker 2-cylinder purchased for $485 in 1909 was responsible for establishing the HW Kuester garage.

Herman and Henry Kuester purchased a building in the southern triangle block from Henry Lemke Sr. This included a three-story structure that had been used as a factory by the Zilberzahn engine factories, but at that time was densely populated with pigeons.

Black and white photos show the original brick building with the words wash, polish, repair and gasoline written next to the door frames. A wooden ramp extended from the boardwalk sidewalk to Main Street, which allowed cars to drive up and into the store.

“My dad worked as a mechanic at the dealership, and he was a salesman and he helped out at the hardware store wherever he was,” Kuester said, shrugging with an attitude that was it back then. Photos from inside the hardware store show a room full of white Thor wringer washers; Cans of Hooker Paint were stacked along the far wall beneath a row of black motor belts that ran along the ceiling.

Another photo shows a man using a hand crank on a gas pump in front of the dealership on Main Street. Kuester estimated the price of gas at the time to be 16 cents per gallon.

The second location for the auto shop was the old Main Street Antique Shop or Male Stripper at 303 Water Street. “My grandfather built it in the 1950s and they stayed there well into the 1960s,” Kuester said of the location that several years ago housed Goodyear Tire. “They moved the business across the bridge because the new location on Water Street was much bigger.”

The Kuester name has a long heritage in West Bend. Kuester’s great-grandfather, Carl, donated the first horse-drawn fire wagon to West Bend, and he opened the Kuester’s Island resort on Kuester’s Island. A small postcard shows a photo of the brown brick house on the corner of Kuester Lane, which is the original family property. The postcard reads “Excellent swimming, boating and fishing. Carl Kuester Owner. The station’s location was listed as “half a mile from the depot”. 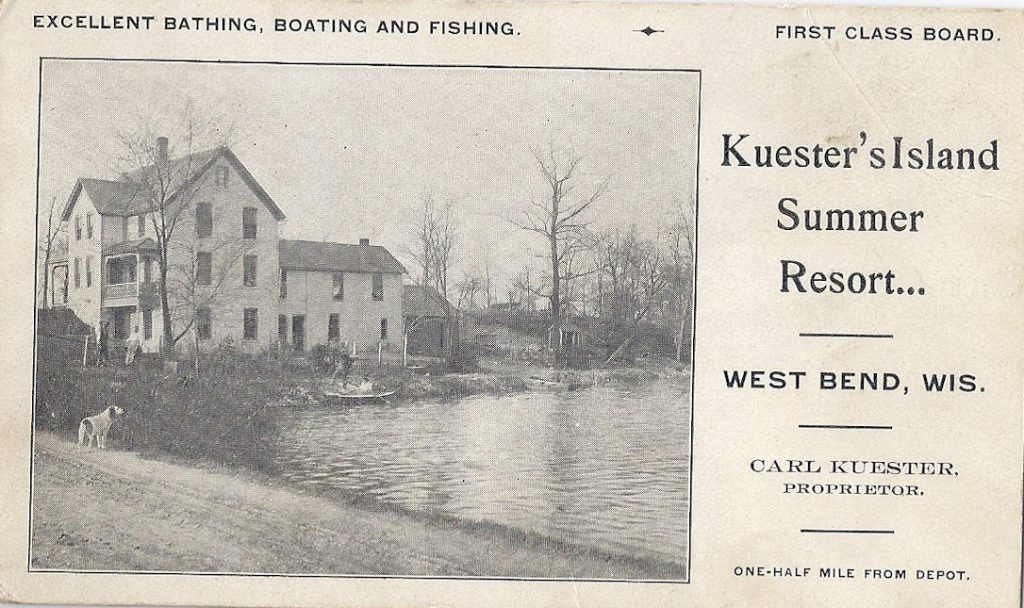 Other local Kuester businesses include an Excelsior motorcycle shop on Park Avenue, a hilltop gas station in Barton (formerly Bagg End), and the Schmidt & Stork wagon factory in Young America.